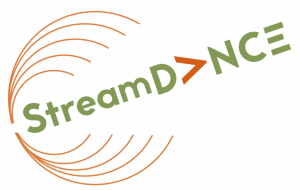 The films premiered in January 2022, enjoyed by some 240 pupils of Kings Cross Academy, London, before being watched by audiences across the globe for a 24-hour streaming.

Enter Anatomical’s gravity-defying, fantastical world constructed entirely of chalk in This World Is Made Me (for ages 5 -8)

Travel through the school gates with Chad Taylor’s When I Hear Music, a hip hop infused take on the first day of High School (for ages 9 – 11)

Celebrate your individuality with Second Hand Dance’s mischief-making wardrobe of sashaying socks and tumbling t-shirts in the Getting Dressed Films (for ages 3 – 7).

With something for all ages, each film is accompanied by accessible versions – see the individual film description below for more detail.

Anatomical – This World Is Made For Me

Chad Taylor – When I Hear Music

More about the Films:

This World Is Made For Me. A film by Anatomical and Roswitha Chesher for children aged 5 – 8 and their families

One gang of friends.

One bag of chalk.

This World Is Made For Me follows the gravity-defying adventures of a group of young friends as they dance in a galaxy of stars and swim with whales in endless oceans. Join the adventure as Orla and her friends draw themselves some fun.

When I Hear Music by Chad Taylor is a powerful hip-hop dance film with animation that explores the emotional rollercoaster young people experience during their first day at high school.

Getting Dressed Films by Second Hand Dance Travel into a digital world of swirling skirts, sashaying socks, glitter ball jackets and tumbling t-shirts.  This series of 5 dazzling, short dance films transforms our everyday clothes into celebrations of our individuality. Set to an 80’s inspired soundtrack, the Getting Dressed Films are created for ages 3 to 7 years old.

Anatomical is led by Anna Williams and Tom Roden, award-winning dancer/choreographers. Since its inception, Anatomical has created its own unique blend of dance, comedy and storytelling with The Doodle Dance Show (TDDS), commissioned and produced by Greenwich Dance (2014) and The Buildy-uppy Dance Show (TBuDs), commissioned by Greenwich Dance & Trinity Laban Partnership Compass Commission. Over 3000 children and families have attended an Anatomical performance in 12 major UK venues including The Place, the V&A Museum, Cambridge Junction, Warwick Arts Centre, DanceEast & The Lowry.

Chad Taylor started dancing at the age of 11. He trained in the foundations of hip hop, and at 14 years of age started to widen his dance vocabulary and practicing other styles such as ballet, Tap, and Jazz. Dancing on TV at the age of 15, he has gone on to work with artists such as Cheryl Cole, Paloma Faith, Sade, Take That, Meatloaf, Joe Mceldry, Little Mix. His first production, ‘Persistence’ premiered in 2013.

Second Hand Dance is a disabled-led dance company driven by Artistic Director Rosie Heafford. Established in 2013, they create touring shows and digital dance experiences for children and adults. The company’s work has a growing international profile as well as local and regional impact and their productions have toured the globe – from the UK to Europe, China, Canada and the USA.

StreamDANCE is the first national project to commission made for broadcast digital dance pieces for young audiences. The project is a rapid response to the global pandemic, directly addressing the lack of digital dance cultural offerings for the youngest in society.

Led by Tandem Works, produced in association with The Place and commissioned by DanceEast, South East Dance and Pavilion Dance South West, supported by Lighthouse and using public funding by the National Lottery through Arts Council England.

This website uses cookies to improve your experience while you navigate through the website. Out of these cookies, the cookies that are categorized as necessary are stored on your browser as they are essential for the working of basic functionalities of the website. We also use third-party cookies that help us analyze and understand how you use this website. These cookies will be stored in your browser only with your consent. You also have the option to opt-out of these cookies. But opting out of some of these cookies may have an effect on your browsing experience.
Necessary Always Enabled
Necessary cookies are absolutely essential for the website to function properly. This category only includes cookies that ensures basic functionalities and security features of the website. These cookies do not store any personal information.
Non-necessary
Any cookies that may not be particularly necessary for the website to function and is used specifically to collect user personal data via analytics, ads, other embedded contents are termed as non-necessary cookies. It is mandatory to procure user consent prior to running these cookies on your website.
SAVE & ACCEPT